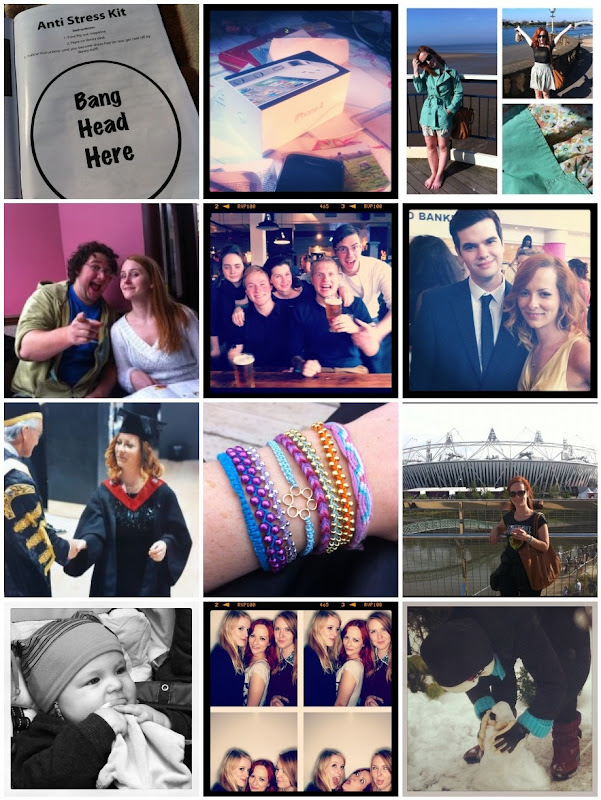 Since meeting some of my school mates on Christmas Day who I hadn’t seen in 10 years I’ve been reflecting a lot about the past decade of my life and how things don’t feel like they happened 10 freaking years ago. Or more than that. It’s really scary and it sort of makes me wanna cry that these things are almost half my life ago. So I wanted to write a post, more for myself, but also for you, that makes me think of all the good things that happened this year.

January – 2012 began the way 2011 ended – lots of uni work what with it being final year. One big piece of coursework was due at the beginning of January, followed by two exams and then another 2 pieces of coursework being due at the end of January. Of course this made the end of 2011 amazing. NOT.

February – I finally became ‘one of the cool kids’ and got myself an iPhone and finally a phone contract. After 8 years of being in the UK I was finally allowed to prove my credit worthiness. Still can’t get credit cards, loans and other shit though, so clearly didn’t make much of a difference.

March – In 2012 I turned 28 on 28th. It was just Lodz and I who took me Southport because I was missing the seaside so very badly (I grew up by the sea in Germany, living in Birmingham which is one of the cities furthest away from ANY coast). This made me unbelievably, ridiculously happy, like a 5 year old girl getting a pink pony kind of happy.

April – I was in the middle of coursework and revision for my final Final Year exams when Lodz called me saying he was in town on campus. I got MASSIVELY pissed off. Like pissed off like I had never been with him before. Went to meet him (basically just to tell him he’s an ass for interrupting my revision and for risking my degree) but then my two best friends Pete & Jess who since graduating last year now live in Paris came around the corner to surprise me ALL WAS FORGIVEN.

May – 18 Years of Hard Work is OVERRRR! Degree completed. Lots of drinking ensued.

June – I had said all year I wouldn’t go to Graduation Ball, but I totally did. Oooops. So glad I did though! After 18 years of hard work (yes, I was 10 when I decided that I’d move to the UK after college and study there) I deserved to celebrate myself.

July – Graduation!!! BEST DAY OF MY LIFE. Also worst day of my life since I realised I had no plans, no ideas, no inkling as to what I was going to do next. Completing a life dream and leaving it behind was and still is the hardest thing I’ve ever had to do and it’s left a big gaping hole in my life.

August – Most mates had moved away by end of July so I was left all by myself in the room that I had been contracted to have until the end of the month to keep myself busy. Out come crafty supplies and I ended up making a good 5 bracelets a day. Obsessed much!

September – Paralymics. I loved the Olympics a lot, but getting to see the Paralympians in action was just beyond anything words could describe. I will never forget 06/09/12 when Lodz & I went to the Olympic Park and got to watch Team GB win 3 gold medals on the track! I even got to meet one of the Olympians at a later point!!

October – My oldest niece (who’s 24 and got married 18 months ago) gave birth to her first son (my great-nephew) Elias in March and his christening was more than due. Also me meeting him was more than overdue. He is the happiest baby boy I’ve ever seen. And my niece makes for a great mum – just weird ’cause I remember her being a baby when I was 4 years old!

November – Press Day Mania. It was such hard work and I still have about a gazillion SS13 previews to blog about, but it was sooo much fun, especially the day I got to share this craze with Cheryl and Gemma.

December – My mum is building a snow man after it snowed on the 2nd day of my being back! Sooo good to be home, honest. After NINE months, it’s the best thing ever!!! Lodz is here with me, so everything is perfect. Except that I don’t have my own laptop, but ah well.

Try it for yourself – try to remember the significant things that happened each month. Even if you think you’ve had a horrible year (I thought I did, before I wrote this post, because of final year stress and the devastation of unemployment), you’ll see that each month will have brought you something good, one way or another. Hold on to those things and try to forget or at least least from the rest.

I also of course wanted to share my Favourite Products (Beauty & Fashion) of 2012… Please excuse the rubbish quality. I can’t afford a better camcorder at the moment, and I thought this one would be better than the little digital camera that I used for my ‘comeback’ video (LOL!) but very, very clearly I was wrong… SORRY!!!